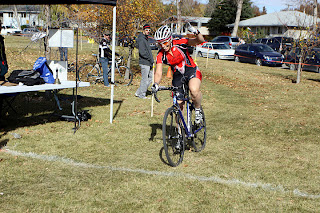 (Michelle gives this weekend the thumbs up. Photo by Mystique Photos)

Beautiful fall weather Sat and Sun saw some huge groups take to the start line. There was lots of cowbells and good suffer faces to be had.


Blow Street CX was put on by the Deadgoats. The course was almost dead flat so how come it hurt so much? Lonn came up with a challenging course using every inch of the park available with a diabolical pea gravel pit. Terrascape was well represented and was looking fast at all times. The sport group saw a plethora of crashes and mayhem in a field of 64 to start the day off with some excitement. Crashes were to be had in all the groups as some tricky corners, well placed sprinkler boxes and pretty yellow leaves on the ground made a recipie for disaster. Several top 10 finishes by Terrascape on the day including yours truly.

Riverbend CX in Red Deer on Sunday opened to a chilly but equally beautiful day. The course this year had 2 significant changes. A much more difficult sand pit section and an evil near vertical dirt run up with a sketchy decent. Only 4 Terrascapers (Andrew, Ryan, Cesar, me) made the trek to Red Deer but we all had fun none the less and learned a few lessons. Lesson one. If you arrive on time and race the correct category you have a much better chance of doing well. Lesson two. Weddings the night before a race make for some interesting responses from your body when you ask it for maximum power. Lesson three. Having the awards after all the racing is done makes for a long day.

All in all I believe that it was another great weekend of cross racing and my legs would have to agree.
From the brain of chonger No comments:

Another great night at the Midweek Mayhem Cross. We switched to Wednesday night to avoid the Tuesday night running group. It was always sporty trying to avoid them in the corners.

Last night in the A group there was 6 Terrascapers including Alana who raced up due to a dinner engagement. We put our practice into play and had a great start.

After the first long straight and corner the Kid and i had made the lead group. We lost contact after the first major corners and it was 3 of us sitting 5,6,7 after Peter Lawerence danced around us.

The Kid tried an early attack that was covered on the long straight. I made a move on the 3rd lap after strategically sitting in on the flats. I made a good gap but it cost me and I could not stay away. The Kid and a TRS rider caught back up and it was going to be us to the finish. The TRS rider made a gap just before the barriers, and held it to the finish. i was just in front of the Kid who probably could have beat me if he had used his lungs for riding and stopped cheering me on. It helped though, Thanks Ryan.

The other boys looked strong when i caught glimpses of them. We will have to see how the battle turned out.
From the brain of Jeff Neilson No comments: 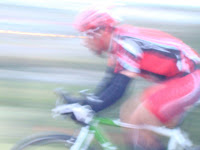 More cross, at MidWeek, more Mayhem. Thanks to Keith and his gang for putting together such awesome courses at midweek the entire Terrascape gang has shown up for an spectacular team work in the A and B groups. Tonight I just had a blast !! fighting (literally) the entire race with Amit for 3rd place was an amazing feeling.... I lined up in the front and went out pretty hard the first lap. I was in 2nd place for most of the third and fourth lap and wasn't sure if I was going to be able to hold it till the end. In the last two laps I found myself blocking Amit in the corners again the trees (well, we are racing aren't we??) I figure it was kind of fun blocking him as he was trying to pass in the inside and then making him work a bit harder to avoid the low branches from getting caught on his helmet LOL... half way through the last lap Amit and the other guy were slowing down a bit when I yelled at them "come on guys let's work together!!!!!" darn, when am i going to learn that I shouldn't be encouraging others to go harder???? anyway, i just thought we were slowing down and didn't want to get caught by the fifth guy. As we were running up the hill I was shoulder to shoulder with Amit (I bet been a ranger pays off, the guy runs up pretty fast).. up the hill and on our bikes at the same time and fighting in the down hill and last flat to the finish line !! got in 4th this time, but got pretty close to podium again. I never saw the guy that came in first after the second lap, I think it was an A rider sandbagging in B, so that will put me in the podium with an awesome 3rd place yupiiiiiii.
From the brain of Cesar Martin No comments: