Flat out!! that's what CX races should be called 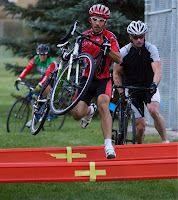 Flat out till you die...... that is how I would describe cycle cross races. They are high intensity races where all that matters is the endurance to go anaerobic for the duration of the race. Sharp cornering, steep hills, fast down hills, jump off the bike and cross barriers, etc. and all that done in city parks covering approx 2kms per lap.
Last night was my 4th MidWeekMayhem race and I felt really good. I started at the front with Andy and Amit and soon I was on third place (not for to long though) as two guys from Spinergy that were working together passed me and I couldn't stay on their wheels.... Then I just had to focused on maintaining my 5th place. There was this one rider sucking up my wheel for the last 2 laps, I knew I could get him in the sprint (don't ask me why, but I just knew it) so I stop looking back and concentrated in the course. The bell announcing the last lap was ringing and I kept a good pace. In the last corners I was still thinking about the guy on my wheel when all of the sudden a BowCycle dude attacked on the left and took me a few seconds to respond... I contested the attack and it was a picture finish loosing my fifth place for about 5 inches..... what a race !!! omg
From the brain of Cesar Martin 1 comment: 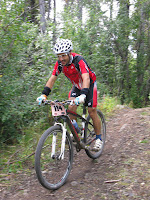 Bow80 was initially a MTB race over 80Kms, but as the weather is always bad this time of the year the organizers decided to change the course a bit and ended up been Bow65.
With over 7,000 feet of elevation gain/loss riding this course in my single speed was a hard choice, but I was up for the challenge and wasn't going to change my mind.....
I woke up at around 5:00 am to have a good breakfast (Andy's favorite as I referred to it) wholewheat pancakes, peanut butter, bananas and strawberry yogurt ummm (only thing though is that my baby ate the last banana and my wife the last yogurt the night before and that ruined my breakfast plan... still love them though). Anyway, had my breakfast with all I have left and headed out to TimHortons for an extra large coffee. 6:30 am and I was parking my Rav across from Station Flats. Rode my bike to pick up the race package and went back the the car to get ready to race. With the unpredictable weather we have in this part of the world I tried to have a few extras in the bag I was going to have access to half way through the course, so I packed extra socks, gloves, rain jacket, water bottles, a sandwich and gels. As for the start, I was only wearing my jersey, vest and arm warmers (that should be enough I thought). 7:30 am and there we go, without knowing how long the race was going to be I tried to go as hard as I could. I was feeling good and strong and was pedaling with the lead group for a while. Right after powder face and into prairie creek trail there was this big and deep Beaver pond (oh my god was it dark and nasty), didn't see the line on the right side and tried to go through it as if I had a boat instead of a bike !! big mistake, upside down I found myself swimming in that nasty Beaver pond. I was freezing now with my socks and gloves all wet, it was going to be a miserable ride if I hadn't packed those extras in my bag a few kms away from me by that time.
2 hours in and 30kms into the race when I made it to the feed zone where I had my bag with all these dry stuff. Put on dry socks and gloves, grabbed another water bottle when I saw Andy and the two dead goat ss guys passing by. Back on the bike as soon as I could to catch those guys, but ss on a gravel road with Andy in the front?? I don't think it was very realistic for me to be able to catch him, I could see him getting away from me as time went by... Finally, we started to climb and I started to close that gap between Andy and me (my first target), the next step was catching those two dead goat ss guys (Tim and Pat). There was a lot of climbing up Powder Face and on the descend of course Andy passed me once again. Catching him up again was tough, and when I did it I flew over the bars and bang off the bike I went !! got on the bike in one piece and now needed to catch two guys instead on one.... At the top of the trail everything was so familiar, maybe because I have ridden Pneuma quite a few times, so I knew that the end was coming. I love Pneuma and on a fresh day I could ride it with no problem, but yesterday every hill seemed steeper. I was running and walking sections, on and off my bike. I managed to pass Andy and stayed away from him during the entire climb. Down Special K I knew he was going to catch me, so I rode as fast as I could and when I got to Tom Snow trail I knew I was safe. I pushed really hard those last 6kms and Andy is almost sure that he saw me at one point, I didn't even want to look back untill the last 1k when I looked and no one was behind me... Through the finish line in 5:04 and ready for the next race.
From the brain of Cesar Martin No comments:

With the Calgary Corporate Challenge now over, 2nd place in the MTB event and my second sub 40min in the 10ks (00:39:14) it is time now to focus on CX season and Bow8o!! My legs are still sore from the 10ks and I don't know how they will respond tonight in the second MidWeekMayhem xrace..I have been trying to recover from the races on the weekend, but not enough time to do so....:-///. The 10ks on Sunday left me pretty sore, it was a tough course with quite a bit of elevation gain/lost (20mts in the first 5k and 45mts in the second 5k), as I was passing the 7k mark I thought I could pick up the pace and hammer the last 3k, but I couldn't make my legs go faster than 4:10p/k pace and thought I wasn't going to make a sub 40...... I sprinted the last 400mts and as I was crossing the finish line my quads started to cramp all over the place and I almost fall ./--- Well, I sure felt good after I stop my watch in 39:14; ran to the car to grab my camera and went back to the finish line to wait for the rest of my team. With all of them in and with a fifth place over all we were all ready to go home and relax for the day...
Tonight will be the second cx race and after that I will definitely take it easy for the rest of the week and prep for an amazing Bow80 in my single speed!!.
From the brain of Cesar Martin No comments:

What can I say.... pre-rode the course for about 3 or 4 laps (yes there were about 2kms long) and even doing that and been aware of the course got lost for a bit on lap one and crashed on lap three.. Anyway, the race was a lot of fun (more than 70 riders lining up on B). I was in the front with an eye on Andy on my left and Amit right beside him. I knew we had to sprint off in order to take the first downhill without anybody around... I managed to get to the first corner on 8th place and hammer to stay ahead.
Off the bike to jump the first barrier and there was a bit of traffic as riders were trying to get back on their bikes.. With only three steep hills in the course it was tough to get away. I think that it was in the second downhill when I missed a turn and got a bit off track, but soon someone was yelling at me and got me back on the right direction.
As I was riding in the front and Amit missed one corner when we got to the finish line to complete lap 1 we were stop for a few seconds as a penalty for cutting corners (isn't that unfair???). Back on the race I was trying to stay right behind Andy and Amit who were the only riders from the same team working together, it was an amazing teamwork show put on by these two Bike-Bros guys.
Second lap and I was still felling good with Jeff Neilson cheering me on the top on the hill !!. on lap three as I was yelling at Amit and Andy in front of me to go hard, my front tire slided and bang I was on the ground.... tried to get on the bike as soon as possible, but my chain was off and it cost me losing Amit and Andy for about 10-20 seconds/
As I was finishing lap three I heard the bell for the last lap (and God I was happy to see the end....), I decided to close the gap with Andy and Amit and tried to go flat out for the last five minutes, finishing 5th overall and getting my first point on a CX race !!! can't wait for next Tuesday./
From the brain of Cesar Martin No comments: