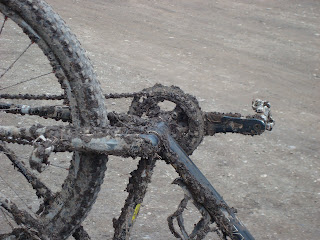 After a few days of rest and recovery I am starting to feel my hands again and can actually type!!./ yeap, it seems like I have cyclist's palsy after the race......

The weather wasn't any good when Maria, the baby and me headed out to Canmore on Friday for the 24 hours of adrenalin race. I was planning on pre-riding the course with Steve Friday afternoon, but we figured it wasn't going to be any fun due to the pouring rain.
I decided to set up the pit instead and spent the rest of the afternoon in the trailer deciding what tires to use for the race.
Saturday morning it continued to rain and I went down to downtown for coffee and a few bags of ice for the cooler. Got back just in time for the pre-race meeting and to do the final touches in the pits.
What a great start, muddy, but tacky, yeap, for the first two laps the entire course was wet !! after the first lap my shoe's clit came loose and was struggling for about half an hour. Luckily got to the pits I Craig was able to tide it up in a minute.
Back on the bike again for a second lap and the course was getting worse and worse.... super wet and slippery, never mind the slippery roots and rocks.
By lap 3 the course was drying out a bit and I was feeling better as I was able to climb pretty much everything.
For some reason I started to have negative thoughts and was pretty much set to quit the race, but kept thinking about a excuse to do it. It was 8:30pm when i was getting ready for the next lap and needed to have my lights on in order to go out again, so I mounted the helmet light that I borrowed from Ray and started my sixth lap. Exited about the night ride I was feeling a bit better, but those negative thoughts still there in my head. Catched up with Steve and told him that I needed a riding buddy to keep going, and therefore was going to hangout with him at least for the night.. Although he was encouraging me to keep going and pick up the pace I decided to take it easy and ride with him. At around mid night he wasn't feeling well at all and started to get sick, so despite we tryed to stay together it was tough not to push in the climbs as I was in my ss and it is difficult not to push on the climbs. Got to the pits at around 2am and waited for him to go out again./
Out we went and was starting to feel a bit better, so we managed to ride together for the remaining of the night.
It was freezing (probably 7c) and had to put on a few extra layers, couldn't stop thinking about the day light and warm sun. Just before finishing my tenth lap the sun was out and I turned out my lights, I was so happy to see that we have made it through the night and that the end of the race was approaching.
Longer pit stop at this time to have a nice and hot breakfast and out again for lap 11th. I was feeling great on this lap and was hammering pretty much everything. Back in the pits again to eat a bit more and drink some coffee to go out, but this time for what it was the worse lap, almost walked half of the course as I didn't feel the strengh to pedal any more. Was set to call it off and decided that it was going to the the last lap, after all I was already top 10 and I was happy with that.
Back in the pits after lap 12 and Steve's wife convinced me to go out one more time and finish with what I have started, so I told her I would wait for Steve and if he was going out for one more lap I would go out too. Of course the sucker didn't say no and we headed out for the last lap. Surprisingly we both were feeling better and did a fairly fast lap.
Finished 8th in the solo category, and very happy that I was able to do it in my single speed.

From the brain of Cesar Martin No comments:

Where to start, that is always the big Q. With only 2 more sleeps before one of my biggest challenges of the racing season I still fighting a cold and trying to get as many things organized as I can. Thinking and planning about food, hydration, pacing, etc... luckily my wife "pit manager" is getting a bunch of things organized for me (love you bella). We will be heading out to Canmore Friday noon and set up our trailer to be all rested Saturday morning. I am planning on pre-riding with my buddy solo Steve and Andy and see the new changes they made to the course this year.
With this been my 5th time participating in a 24hours event, but only my 2nd time solo I am starting to get nervous and anxious at the same time. I am not very good at tapering and with a week doing nothing I am feeling pretty anxious and desperate to go out and hammer the trails !!
I washed my bikes last night and oiled them pretty well, good thing about single speed is that you don't have to worry to much about gears, cables, changes, etc...
I selected a gear ratio of 32/20 and I hope that my legs still alive after 24hours. The course is 17.3kms long with over 430mts of elevation gain... the goal AS MANY LAPS AS I CAN IN 24 HOURS OF PURE ADRENALIN.
From the brain of Cesar Martin No comments: