The usual season starter for the mtn bikes is the Coulee Cruiser in early May.... which none of us made it to. The combination of poor weather, and no hill climb or road race did not entice those of us looking for a bigger weekend. The Perogy XC conflicted with another standby of the marathon mtb crowd: the Salty Dog. It's warm, dry and a whole pile of fun when our Calgary trails are, well..... not. There was a big showing of Terrascapers, new and old. P-Ro, Jeff, Nic, Lisa, Adrian, Cesar, Lavigne, Jason C., the Kid, and myself. Jeff had a great race, coming second in the Open Men (an overall) to Big Brian Cooke, and was mano-a-mano with Leighton Poidevin for the majority of the race. A gentlemen's agreement allowed them to finish their race after 9 laps, even though they really had time for one more. Cesar overcame Adrian after a good battle during their 7 laps, likely as a result of his ginormo pack (it was so big, one can't call it a camelback). 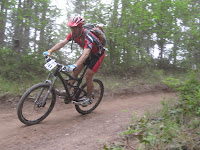 Perhaps that is where his second set of legs are hidden. Nice work on the top-20 finish in the under 40 Sport category. P-Ro squeaked in a top 30 result in the same category, besting Jason Copan - but still with 7 laps in the muggy heat. And Lavigne - what to say. Lavigne ground out those 6 lasp, despite those screaming leg cramps. For those who were there, you may recall that screaming with a bit of a shudder. But pretty good for a guy whose bike was stolen the day before.... grrrr. 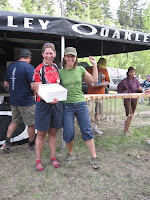 Now the ladies: Nic had a solid race, coming in 3rd in the under 40 Women, also overcoming heat cramps, dehydration, and the un-funness of both of those. As is usual, it was left to our Master rider LL to bring home the pie.

Lisa rode a very strong race for 7 laps, finishing second to 40+ Deadgoat specialist, the great Trish Gracjsyk.
The Kid and I (and Zeech) had an off race - the Kid being injured, me being very sick and keeping the entire BnB up with my bronchitic spasms, and Zeech (Nic's hubby) impersonating the Kid to just get a lap in. But it was more than compensated for by the Log Bog Friendship Farm, where we stayed. Serious. 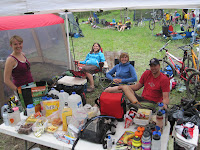 The race atmosphere was fun as always, but the numbers of racers are increasing, and the trails are showing it a bit. It still can't be beat for the early season training race. And thanks to our superb support crew - the Terrascape Pit.

Then there was the GivR8'er. If you recall, that was the start of our less than stellar summer. It was cold, wet and rainy, and the course was inevitably going to be slick and gross - but we decided we might as well. I was racing single speed with Trish, Jeff and the Kid teamed up and Jay and Lisa decided to go for the coed.It was a brisk start in the morning, but once one the bike, the temperature was perfect. Once you stopped to let your teammate do a lap however..... yikes! 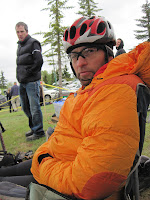 The trail actually became perfectly tacky, but still pretty muddy in many sections. Derailleurs suffered. Singlespeed was definitely the way to do - although my poor v brakes were not that effective, and my 1999 fork with 1/2 " travel was destined to be trouble. Luckily late the night before Jeff switched over a new fox float, with an old front disk brake - wobbly and loose, but better than v-brakes! Terrascape again rocked the podium, with Trish and I finishing first in the women's duo, and Lisa and Jay rounding out the co-ed duo in 3rd.
From the brain of Alana No comments:

Well, it's been a dreadfully long time since anyone has posted about their endeavours, which isn't to say that Terrascapers have been sitting idle. On the contrary, there has been much riding, training, racing and relaxing since the Prairie Roubaix, trips to Moab, and of course, Mike's unfortunate accident. He is happy to report that he is now free of his neck brace, after 12 long weeks. I shall do my best to recount some of the highlights from the past few months, and hope that some of my teammates correct where I have erred.
From the brain of Alana No comments: